Bull fighting events are much loved by the Chinese Miao Minority and they are held at most festivals.  It is strictly a spectator sport with audience participation in the form of gambling, lots of gambling.   A bull is an expensive animal and frequently one bull  will be owned by an entire village.  The bull is marked on the side with white paint for identification and decorated with red ribbons about the horns and neck.  It is  proudly taken to the festival area by many of the men of the village.

The bulls fight each other.    The bull that "runs away" is clearly the loser, causing lose of both face and money to the village.    Sometimes, the bulls will  lock horns, neither one will "give up" and audience participation is necessary to separate them.   A rope is  tied to one  rear leg of each bull.  Then the men as a group pull on the ropes until the bulls are separated.    This leads to much debate as to which bull is the winner. 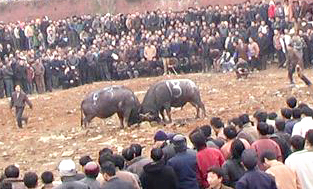 Qiandong Miao (South of Guizhou prov.), they like bull fighting, which is held in most of the festivals.

There are several saying of the source of the Bull Fighting in the folk.

This custom is traced by the Old Miao Group.

To celebrate the birthday for the Bull King, because bulls are one of the most importance in their daily field work.